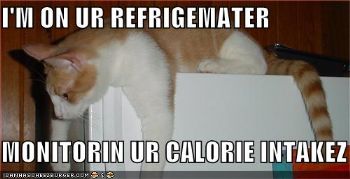 Had lots of stuff hit me all at once , and the realizations aren’t quite fully formed but I had the ‘oh yeah… duh’ moments.

One of those is that I’ve been feeling fat. Ok, that’s not so enlightening, but it hit me that it’s because I *am* fat… not in the degrating/berating way. Just in the matter of fact, look at the BMI and regular scale and it’s obvious way. I’ve gained some weight, and I’ve been feeling every ounce of it, and it’s really not good. Get winded easier because I haven’t been exercising consistantly and am carrying around at least 50# more than I should be. And my clothes aren’t fitting well, so it makes me feel even huge-er and unattractive…

Then the 2nd realization hit me… I’d been ruminating about how, when you’re in a good mood & life is going pretty good, it’s a lot easier to do things that are beneficial for yourself – exercising, eating right, cleaning house, being social – it’s almost like the planets are in the most productive allignment and all is good with the world. Then IT happens… not sure what IT is, but it’s like juggling 10 balls, and all of a sudden one of them falls out of sync and everything comes crashing down. And then every little thing becomes _so hard_. It’s a struggle to get out of bed, let alone fold laundry, go for a walk, go grocery shopping.

Then I got IT… It’s not because things all of a sudden become difficult. They’re the same activities that they were before. It’s the perception that changed. One thing went out of wack, the happy shiney bubble burst and the blahs set it. Once that happens, the perception of the activities changes from ‘tralala it needs to be done so no big’ to ‘OMG this is a CHORE!’ Our internal dialog changes accordingly, too.

Instead of ‘wow, I feel good when I walk, lets do it again!’ or “look how pretty the living room is when I straighten it!” or… you get the idea… we’re now telling ourselves “this place is a mess! Gad I hate it! I *have* to clean it!” or “I am sooo fat! I have to get my butt in gear and work out.” Not only are we knocking ourselves down, we’re also making the activity a punishment.

As a long time FlyBaby, I’m constantly reading “if it isn’t _fun_, it won’t get done”… if you make doing the dishes a punishment, of course your going to procrastinate and loathe doing them. If exercise is a punishment, why would you spring out of bed to do it?!

Since identifying the problem is half the battle, that was the easy part. Now comes the interesting challenge of finding the fun me again. I know she’s in there, just gotta find her and have her come out to play. 🙂